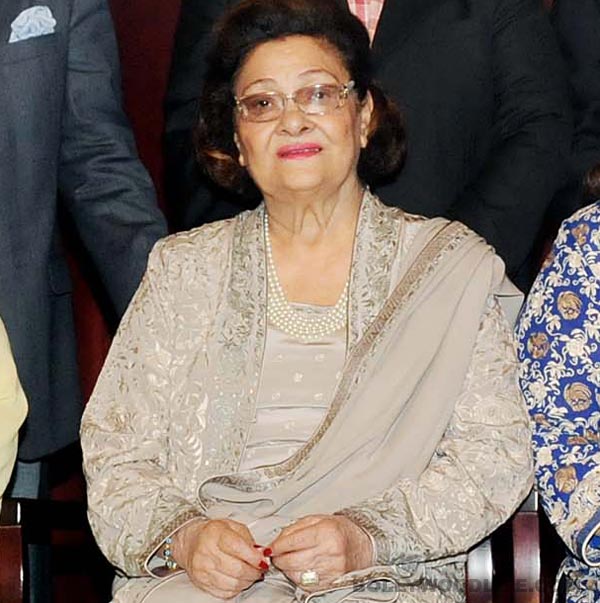 Krishna Kapoor well known for her party hosting was born as Krishna Malhotra on 30th December,1930 in Rewa State, Madhya Pradesh, India. She was the cousin of Prithviraj Kapoor.

She was born into a Punjabi Hindu Khatri family to Raisaheb Kartar Nath Malhotra who was an Inspector General of Police of Rewa state, Madhya Pradesh, India. Her father had 3 wives. She had 13 siblings including Prem Nath (Actor), Rajendra Nath (Actor), Narendra Nath (Actor), and Uma Chopra.

At the age of 16,On May 1946, She got married to Actor and Filmmaker,Raj Kapoor.The couple had three sons,Randhir Kapoor (Actor), Rishi Kapoor(Actor), Rajiv Kapoor(Actor) and two daughters Rima Jain and Ritu Nanda. She was the grandmother of Kareena Kapoor, Ranbir Kapoor, Karishma Kapoor.

She was 16 at the time of her marriage and even her Matric result came after her wedding and she had passed with distinction marks.

She died at the age of 87 on 1st October,2018 due to cardiac attack. She was suffering from breathlessness for the last few years.

The embodiment of grace…of dignity …of elegance and of stength….Krishna aunty will always be the First Lady of the Film Fraternity…the most generous, kind and gentle person I have ever known with the most terrific sense of humour…will miss you Krishna aunty❤️❤️❤️ pic.twitter.com/8CSo7rw19V

I am so sorry to hear of the passing of #KrishnaRajKapoor The few times I interacted with her were so memorable; she was an incredible personality full of life and passion and with never a hair out place! She will be missed greatly. My deepest condolences to the family.

Deeply saddened to learn about the sad demise of Smt. #KrishnaRajKapoorJi. She was one of the most dignified and affectionate ladies that I met. May her soul rest in peace. My condolences to the entire Kapoor and Nanda family. Om Shanti.? pic.twitter.com/G4IMSuFbZJ

Such sad news this morning.. the most beautiful lady of our industry Krishna Raj Kapoor passes away.. my heart goes out to the entire family.. Krishna Aunty may you rest in peace.