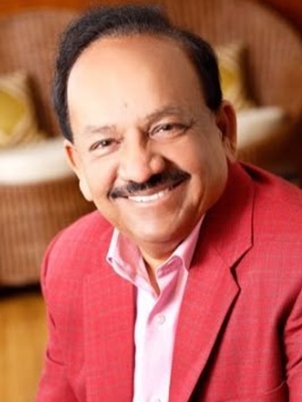 Harsh Vardhan is a member of the Bharatiya Janata Party. He is the current Union Minister for Science & Technology in the Government of India. Initially, he was given the charge of the Union Health Ministry.

Dr. Harsh Vardhan is a member of the Bharatiya Janata Party. He is the current Union Minister for Science & Technology in the Government of India. Initially, he was given the charge of Union Health Ministry. Formerly he had been the Minister of Law and Minister of Health in the Government of Delhi. He was first elected in 1993 as member of the Legislative Assembly of Delhi from Krishna Nagar Vidhan Sabha. Dr. Vardhan’s contributions as Health Minister as well as his efforts to eradicate Polio were a huge success and appreciated by all. His Polio Eradication Plan was adopted by the Government of India and exercised throughout the nation. Former Prime Minister Atal Behari Vajpayee described him as Swasthya Vardhan.

The way he rebuilt the operations in Delhi after the party’s defeat in 2003 elections speaks volume of his capabilities and organizational skills. In recognition of this, the Bharatiya Janata Party made him the party’s President for the third term in 2007. By profession he is an ENT surgeon.

Dr. Harsh Vardhan was born on 13 December 1954 in Delhi. He is the second child of Late O. P. Goyal and Snehlata Devi, and has an older sister and a younger brother. He completed his schooling from one of the oldest institutions of North India, the Anglo-Sanskrit Victoria Jubilee Senior Secondary School in Daryaganj, Delhi. He did his MBBS and thereafter MS in ENT from GSVM Medical College in Kanpur and returned to Delhi to practice as an ENT surgeon.

He married Nutan, who has expertise in hospital administration and at present is a homemaker by choice. They have two sons and a daughter. One of his sons, Dr. Mayank Bharat, is an MBBS and MBA, and his other son Sachin is a graduate in Accountancy and Finance from Monash University. His daughter, Inakshi completed her B. Com (Hons.) from the Delhi University. He lives in the house built by his father, Late Om Prakash Goel. A teetotaler, he believes in the goodness of practicing physical exercises and yoga. During his term as Education Minister, he had made value education, yoga and sports compulsory in the curriculum of the schools of Delhi.

After getting an MS with specialisation in ENT, he came back to Delhi to practice as ENT surgeon. As an RSS activist from childhood, he always had the urge to serve the society. To achieve this he took up various projects. He worked in east Delhi after joining the Delhi chapter of the Indian Medical Association to form solidarity of medical practitioners. During his early days, he held important posts in the Delhi Medical Association such as Secretary, President (East Delhi) and State Secretary & President.

Dr. Harsh Vardhan contested the 2014 General Elections from the Chandni Chowk parliamentary constituency of Delhi. The two major candidates contesting against him were journalist turned politician Ashutosh of the Aam Aadmi Party (AAP) and the reigning MP Kapil Sibal of the Indian National Congress (INC). Dr. Harsh Vardhan won the seat with 4,37,938 votes as compared to the runner-up Ashutosh’s 3,01,618 and 1,76,206 of Kapil Sibal.

Dr. Harshvardhan was sworn in as the Union Minister of Health & Family Welfare on 26 May 2014. His portfolio was later changed to Science and Technology during the expansion of Narendra Modi government’s Cabinet.

Dr. Harsh Vardhan has been a Rashtriya Swayamsevak Sangh (RSS) activist from his childhood, which gradually saw his greater participation in politics.

To acknowledge his commitment towards eradication of Polio he was honored in February 2002 at the Polio Plus International Presidential Summit that was held in Mumbai.