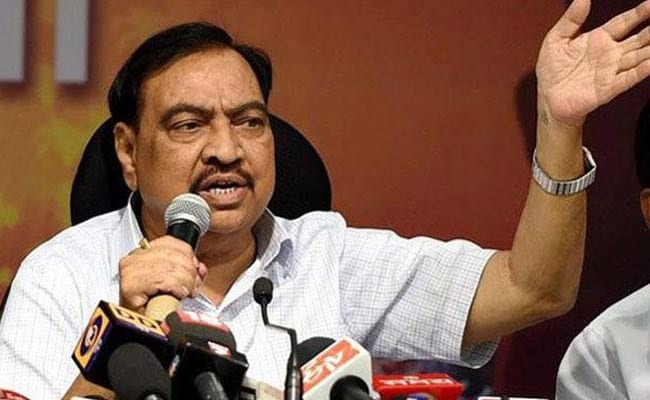 There had been speculation in the last few days that he may quit the BJP. (File)

Senior BJP leader Eknath Khadse, who is set to join the Nationalist Congress Party (NCP), today blamed Devendra Fadnavis for his exit and accused the former Chief Minister of “destroying his life”.

Eknath Khadse, who was a minister in the previous BJP-Shiv Sena government in Maharashtra, had been upset since 2016, when he was made to resign over allegations of corruption.

There had been speculation in the last few days that he may quit the BJP and join the Sharad Pawar-led party. Devendra Fadnavis had scoffed at the buzz and said: “This kind of mahurat (auspicious time) is being talked about every day and I will not speak on it.”

One of the BJP’s prominent faces in Maharashtra, Mr Khadse’s hopes for a comeback were dashed when he was dropped as a candidate for last year’s Maharashtra election. His daughter Rohini Khadse was fielded instead, but she lost.

Mr Khadse, 68, was also passed over for the elections to the Assembly Legislative Council in May and he accused Devendra Fadnavis of playing a role in cutting him off.

After the BJP failed to retain power in Maharashtra, Mr Khadse had been among a section of leaders who were openly critical of the way the party – read Mr Fadnavis — handled the polls.

His meeting with Chief Minister Uddhav Thackeray soon after set off speculation that he was heading to the Shiv Sena. The BJP, at the time, acknowledged Mr Khadse’s resentment and said his concerns about party workers conspiring to sabotage his daughter’s campaign would be addressed.

“Devendra Fadnavis destroyed my life. I spent four years in mental tension. I repeatedly said in my speeches that you are forcing me out of the party. I feel sad about quitting the BJP but I had no choice. There were attempts to frame me on false charges of rape,” Mr Khadse said today, after making his switch to the NCP official.

On Monday, NCP chief Sharad Pawar had said that Mr Khadse, as leader of opposition, had played a huge role in building the BJP in Maharashtra. “He would criticise us and we would take note of it,” Mr Pawar said. He said Mr Khadse would be justified in quitting the BJP. “One is bound to feel disturbed if his contributions and hard work are not taken note of. He may think why shouldn’t he shift to a party which appreciates his work,” the NCP veteran had said.