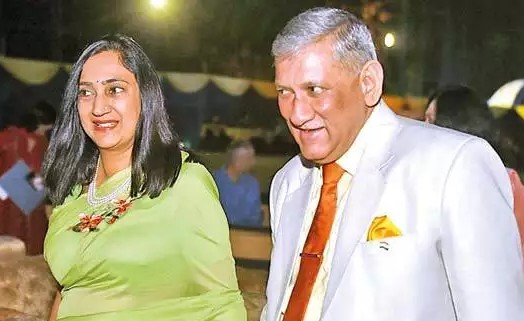 Mrs. Madhulika Rawat is the President of Army Wives Welfare Association (AWWA) and wife of Indian Army Chief General Bipin Rawat. She works for the welfare of wives, children and dependents of Army personnel. AWWA is one of the renowned NGOs in India. She has been a part of many welfare programs and campaigns that aid the Veer Naris (Army widows) and differently-abled children.

Madhulika Rawat has been a catalyst in empowering the Army men’s wives, encouraging them to take charge of their life and enroll with some courses in tailoring, knitting, and bag making along with beautician courses and making `Cakes and Chocolates’ to make them financially independent. She also promotes the Health Awareness and Well Being of its members.

She did her studies in Delhi and completed her graduation in psychology from Delhi University(DU). Apart from AWWA, she continues to do many types of social work, especially for cancer victims.

Madhulika Rawat, along with her husband Chief of Defence Staff General Bipin Rawat, and 13 Others, were in an Indian Air Force helicopter that crashed in Tamil Nadu’s Coonoor on Wednesday (Dec 8th 2021) afternoon. The couple was going to the Defence Services Staff College in Wellington, Coonoor when the tragedy happened.