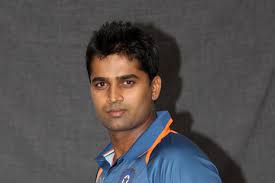 Ranganath Vinay Kumar is a former cricketer who has represented India at test, one day international and Twenty-20 levels. He played Domestic Cricket for Karnataka and also in the Indian Premier League for Royal Challengers Bengaluru and Kolkata Knight Riders. He is a right arm medium fast bowler. He captained Karnataka to Ranji Trophy title in 2013-14 and 2014-15 seasons.

Vinay Kumar was born on 12 February 1984 in DavanGere Karnataka. He completed his schooling from government school in Devagere before graduating from the A.R.G. arts and commerce college with a bachelor of commerce degree. Vinay merried to Richa Singh on 29 November 2013.

Kumar were selected for Karnataka Ranji Trophy team in 2004-05 season and made his debut against Bengal.He was the Ranji Trophy’s second highest wicket taker in the season of 2007-08 with 40 at an average of 18.52.He was signed by the Royal Challengers Bengaluru for the IPL in 2008.He is affectionately called as ‘The Devangere Express’.

He was the highest wicket taker in the 2009-10 domestic season. In IPL 2010 he took 16 wickets the highest among all pace bowlers in the tournament. Vinay Kumar made his ODI debut against Zimbabwe in Harare taking 2/51 off eight overs in a six wicket defeat.

In February 2020 Vinay Kumar announced his retirement from all forms of the game.