Vikramjit Singh Cricketer is a Dutch cricketer. Singh was born in Cheema Khurd, Punjab, India. He moved to the Netherlands at the age of seven and has been playing for the Netherlands national cricket team since 2019.

History is going to be created in the group match of Super-12 of the T20 World Cup. In the game between India and Netherlands, two Sikhs will go face to face. One is India’s star bowler Arshdeep Singh and the other is Netherlands’ talented batsman Vikram Jeet Singh.

Nineteen-year-old Vikramjit Singh is considered one of the brightest cricketing talents in the Netherlands. He will take the field against India on Thursday. Vikramjit was born in Cheema Khurd, Punjab, and he moved to the Netherlands when he was 7 years old.

During the Under-12 tournament in the Netherlands, 11-year-old Vikramjit was noticed by captain Peter Boren. After this, he got sponsorship from a Sports Goods manufacturer’s Company. This company made bats for legends like Sachin Tendulkar, Sourav Ganguly, Mahendra Singh Dhoni, and Harbhajan Singh. 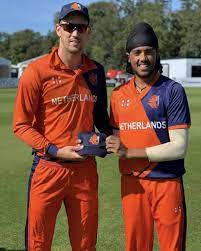 At the age of 15, Vikramjit started playing for Netherlands ‘A’. Two years later, he made his senior team debut. Becoming a professional cricketer in a country like the Netherlands was not easy. Vikramjeet trained for six months at the Gurusagar Cricket Academy in Uniyal, Chandigarh, to hone his talent. Vikramjit started training in Jalandhar in 2021 with former India Under-19 player Taruvar Kohli. After that, he never looked back.

Dada started a transport company in the Netherlands

When militancy started in Punjab in 1985, Vikramjit’s grandfather had left Khima Khurd and moved to Delhi. After that moved to the Netherlands with family. Made a living for the family by driving a taxi. Gradually started a transport company. In 2000, Khushi Cheema handed over the company to son Harpreet and returned to India. 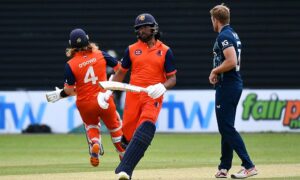