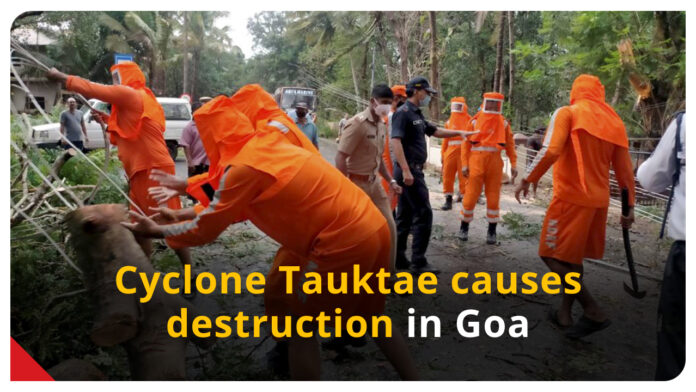 New Delhi / Thiruvananthapuram: The Central Meteorological Department has said that Typhoon Toute has become the strongest cyclone in the Middle East. Taut is located about 120 km west-northwest of the Panaji coast of Goa, 380 km south-southwest of the Mumbai coast and 620 km south-southeast of the Veraval (Gujarat) coast. Thousands of people in low-lying areas on the banks of the West against the threat of a hurricane.

The National Crisis Management Committee said that about 80 disaster relief teams have been deployed in different states. The Army, Navy and Coast Guard have also deployed rescue teams.

It is raining heavily in Goa. Extreme levels of flood danger were announced in the next 24 hours. It is expected to reach the coast of Gujarat in a north – northwesterly direction on the evening of the 17th and cross the coast between Porbandar and Mahua (Bhavnagar district) in Gujarat by the early morning of the 18th.

Extreme levels of rainfall and strong winds are expected along the Kerala coast as the cyclone will continue to affect up to 17 states. Orange and yellow alerts were declared in various districts. Be aware of the dangers of seasickness and strong thunderstorms.

Until further notice, the Disaster Management Authority has imposed a complete ban on going to sea off the coast of Kerala. Strong winds and heavy rains are continuing in various districts of Kerala due to the effects of the cyclone. Extreme levels of flood danger were announced in the coastal and low-lying areas. Many families were evacuated.