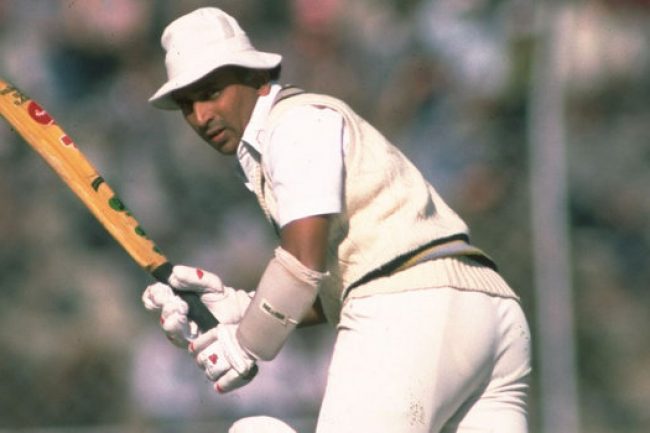 Sunil Gavaskar, the Little Master, the cricket legend, the first batsman to score 10,000 Test runs turns 70 on this birthday. Here are the birthday wishes to the legend on his birthday through twitter.

Wishing a very happy birthday to an extremely special man, whose passion for the game even to this day is an inspiration for us… just as his batting was!
May God always keep you happy and healthy Gavaskar Sir. pic.twitter.com/C2UOnvNyYI

Happy birthday to one of the greats, Sunil Gavaskar! pic.twitter.com/AFw2njatE0 Sunil Manohar Gavaskar often known as Sunny Gavaskar was born on July 10, 1949, in Mumbai. Gavaskar is a former Indian International cricketer who played from 1971 to 1987. He is considered as one of the greatest batsmen and the best opener in the history of Test cricket. Gavaskar has a mind-blowing average of 65.45 against the West Indies, whose fast bowling attack was considered as the most ruthless in the early ’70s and ’80s. He was applauded for his batting technique against the ruthless fast bowling. Sunil Gavaskar studied at St Xavier’s High School in Mumbai. While playing for his school, young Sunil Gavaskar was named as the country’s Best Schoolboy Cricketer of the year in 1966. Some of his fine knocks in school cricket were 246*, 222 and 85. Later he scored a century against the London schoolboys who toured India.

Sunil Gavaskar made his first-class debut for Vazir Sultan Colts XI against Dungarpur XI in 1966/67. Then for 2 years, he remained in Bombay’s Ranji Trophy Squad without playing a single match.  He made his domestic debut in the 1968/69 Ranji season against Karnataka Ranji Team in which he was out for a duck which led to several claims that reason for his selection was only due to his uncle Madhav Mantri who was a member of  Bombay’s selection committee. He shattered all the critics in his second match with a century against Rajasthan and smashed two other consecutive centuries for which he was selected to the national team in 1970/71 to tour the West Indies. Sunil Gavaskar made his debut in Test matches vs West Indies on 6th March 1971. His cap number is 128. He missed his first test due to some finger infection. In his second test, he scored two fine knocks of 65 and 67* scoring the winning runs of the match. It was the first ever test match win for India vs West Indies. In the third test match, Sunil Gavaskar scored 116 and 64* and in the fourth test, he made 1 and 117 not out. In the fifth test match, he made sensational knocks of 124 and 220 which led India to register their first ever series win against West Indies.

Sunil Gavaskar achieved several records in that series which includes:-

the first Indian BATSMAN to SCORE 4 centuries in one Test series,

first Indian to SCORE 700+ runs in a series Batting and fielding stats in Tests, ODI’s, First Class cricket and List -A of Sunil Gavaskar