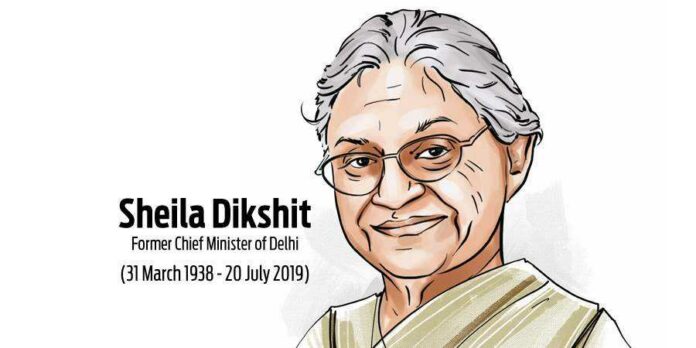 Sheila Dikshit(Delhi’s former CM )passed away on Saturday. 81-year-old Sheela Dixit had been ill for a long time. At the moment, Congress had given him the responsibility of the Delhi Pradesh chief. Sheila Dikshit, the Chief Minister of the capital for 15 years, died at Escort Hospital in Delhi.

She was ill for a long time and was undergoing treatment at Escort Hospital. she was the Chief Minister of Delhi from 1998 to 2013. According to doctors, Sheila Dikshit had a heart attack at 3.30 pm and breathed last at 3:55 pm. Politicians in the country can be with his death. Delhi CM Arvind Kejriwal, PM Modi, and Rahul Gandhi condoled his death

On the demise of his mother Sheela Dixit, Sandeep Dixit said, “My mother is not there, it is natural that I will remember them. The pain of losing the mother can not be erased. Whenever people will talk about the development of Delhi, Sheela Ji will always be remembered.

Delhi CM Arvind Kejriwal: People will miss Sheila Dikshit ji a lot, she had worked a lot for Delhi. Even though we were from different parties, whenever I met her she showed a lot of love. I pray to god to give peace to her soul & strength to her family to cope with this loss. pic.twitter.com/uNSDpxL2Xh

President Ramnath Kovind condoled the passing away of former Delhi Chief Minister Sheila Dikshit on Saturday and said that during his tenure there was a change in the national capital. Kovind expressed his condolences to Dixit’s family and supporters.He tweeted, sorry to hear about the demise of former Delhi Chief Minister and senior political personality Mrs. Sheela Dikshit. During his tenure as Chief Minister, there was an impressive change in the capital for which he will be remembered. The funeral of Sheela Dikshit will be held at 2:30 pm on Sunday in the Corporation’s Bodh Ghat. Today, at 6 a.m., his body will be kept for Nizamuddin’s last home position.

Listed  some facts about Sheila Dikshit:

Former Delhi chief minister Sheila Dikshit was the longest-serving chief minister. She died today at a private hospital in Delhi, where she was admitted for a heart ailment.

For three consecutive terms, from 1998 to 2013, senior Congress leader served as the chief minister of Delhi.

Mortal remains of Sheila Dikshit brought to her Delhi home

Mortal remains of former Delhi chief minister Sheila Dikshit have been brought to her residence in Nizamuddin.

Officials with Delhi Metro Rail Corporation (DMRC) feel the hike was necessary to recover previous losses and ahead of  initiating the new phase of Metro.

Also, the hike happens after a long gap of eight years. The average hike has been of Rs. 10 beyond 5 kilometers.  Smart card holders will be given 20 percent discount on non-peak hours.