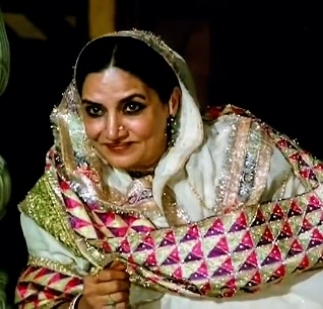 Shaukat Kaifi was an Indian theater and film actress. Her husband was the Urdu poet and lyricist, Kaifi Azmi. Both of them were leading lights of the (IPTA) Indian People’s Theatre Association and the (IWA) Progressive Writers Association , which were the cultural platforms of the Communist Party of India.

Shaukhat Kaifi married to noted Urdu poet, Kaifi Azmi. They had two children together, Shabana Azmi (b. 1950), a renowned actress of Indian film industry and Baba Azmi, a noted cameraman, and is part of the Akhtar-Azmi family.

Shaukhat Kaifi was born into a Muslim family in Hyderabad State in a noble family. She is an integral part of the (IPA) Indian People’s Theatre Association, and member of the Communist Party of India. She played the role of Khannum jaan in Umrao Jaan(1981), the same role was played by her daughter Shabana Azmi in the 2006 remake of the same name.

She wrote a biography, Kaifi and I, which has also been adapted to a play Kaifi aur Main. It premiered in Mumbai in 2006 on the 4th death anniversary of Kaifi Azmi.

The actress passes away at her Juhu home of age-related ailments late on Friday evening at the age of 93 due to cardiac arrest. She was buried at the Sunni Kabristan in Versova suburbs at 4:30 pm, 3 rows away from her husband Kaifi Azmi.