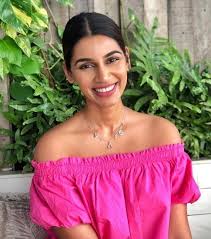 Sanjana Ganesan is an Indian model, actor and anchor. She has hosted the 2019 Cricket World Cup from the Indian side. She also works for Star Sports and has hosted several cricket, badminton and football events.

Sanjana was born on 6 may 1991 in Pune Maharashtra. Her father’s name is Ganesan Ramaswamy and he is a management guru and an author and her mother is Dr Sushma Ganesan,she is an advocate and a fitness coach she has a younger sister Shital Ganesan who is a dentist.

She completed her schooling from Bishop’s School,Pune. She pursued B Tech from the Symbiosis Institute of Technology in 2008 from Pune, she was a gold medalist in Symbiosis after completing her education she joined in it and Digital Marketing firm cdk Global As a Software Engineer from 2013 to 2014.

Sanjana participated in the 2012 Femina style Diva fashion show and she ended up as a finalist after graduating from college she started working in an IT company and pursuing modelling alongside her job she took part in the family name is India Pune competition in 2013 and she reached the finals but she didn’t win.

In 2016 she was hired by Star Sports as an anchor and sports presenter she also hosted a show named match point during the Indian Premier League she was eventually hired by the KKR to host an exclusive show for KKR regularly the show was called Knight Club. Sanjana has also hosted the IPL auction on Star Sports. She also used to host a show during the world cup named Dil Se India.

In 2013,during the MTV Splitsvilla show Sanjana had an affair with her co-contestant Ashwini kaul. She broke up with Ashwini in 2015. Sanjana got married on 15 March 2021 to Indian cricketer Jasprit Bumrah.