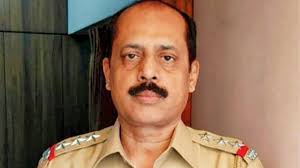 Sachin hindurao vaze is a suspended assistant police inspector of the Indian state of Maharashtra. He is currently in the custody of the National Investigation Agency for his alleged involvement in the murder of Mansukh Hiren and the 2021 Antilla Bomb Scare.

Sachin was born on 22nd February 1972 in Kolhapur Maharashtra. He completed his education from Maharashtra and joined the state police service in 1990 as a sub inspector. He was first posted to the naxal affected area of Gadchiroli, Maharashtra.

He joined police force in 1990 and in 1992 he was transferred to Thane city police where he quickly gained Fame for detecting several significant cases. Rising in Rank he eventually had the special squad of Thane Police and big in carrying out Encounters in the City Allegedly killing over 60 criminals in the Mumbai Thane area.

Sachin was selected to work in Mumbai Police Elite crime intelligence unit CIU and along with his mentor Pradeep Sharma, later was transferred to the anti- extortion cell where his first ever encounter was recorded.

Sachin vaze:s career spanned 30 years, during which he became known for encounter killings of 63 alleged criminals including notorious gangsters like Munna Nepali.

In march, 2014 Sachin and 14 other policemen were suspended on murder charges in the custodial death of Khwaja Yunus , a suspect in the 2002 Ghatkopar Bombing case. Sachin subsequently resigned from the police in November 2007 and after request for his Reinstatement were rejected by the Maharashtra government.

On 25 February 2021 a Mahindra Scorpio SUV with fake licence plates and around 20 explosive gelatin sticks was parked outside Mumbai Businessman Mukesh Ambani’s residence Antilia. The explosives were not connected and no detonator was found instead a warning not was found inside stating that this was just a trailer. Vaze was the first investigation officer in the bomb scare case. The Persumed car honour Mansukh Hiren, who had filed a police complaint about the SUV been stolen was later found that in a Creek near Thane on March 5 2021.

Three days before his death Hiren had written a letter accusing the police of harassment opposition of Maharashtra. Devendra fadnavis demanded the arrest of vaze for hirene’s murder claimed that hiren’s wife suspected that was killed her husband.

He is currently in the custody of the National Investigation Agency for his alleged involvement in the murder of Mansukh Hiren and the 2021 and Antilla bomb scare.