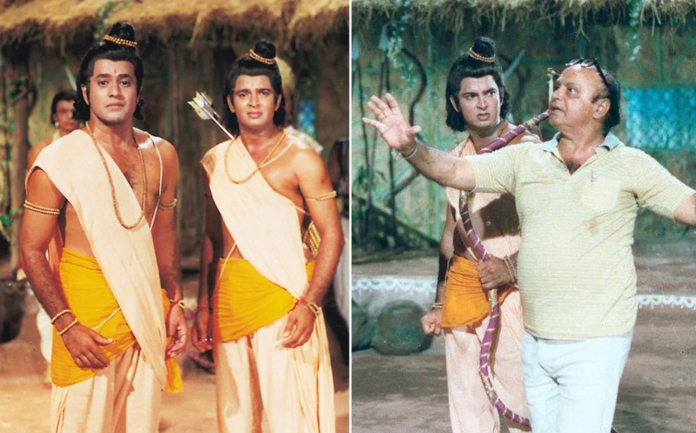 Ramanand Sagar migrated from Pakistan to India during partition. He worked as a peon, truck cleaner, soap vendor, goldsmith apprentice, etc. during the day and studied for his degree at night. He was a gold medalist in Sanskrit and Persian from the University of Punjab in 1942. He was also editor of newspaper Daily Milap. He wrote many short stories, novels, poems, plays, etc. under names like “Ramanand Chopra”, “Ramanand Bedi” and “Ramanand Kashmiri”.

In 1932, Sagar started his film career as a clapper boy in a silent film, Raiders of the Rail Road. After partition, he relocated to Mumbai and started out as an assistant stage manager in Prithvi Theatres of Prithviraj Kapoor. Also, directed a few plays under the fatherly guidance of Kapoor. Along with other films that Sagar himself directed, he wrote the story and screenplay for Raj Kapoor’s superhit Barsaat. He founded the film and television production company known as Sagar Films (Pvt. Ltd.) also known as Sagar Arts in 1950.
He produced and directed many films. He won the 1960 Filmfare Best Dialogue Award for Paigham which was directed by S. S. Vasan and starred Dilip Kumar, Vyjayanthimala and Raaj Kumar in lead roles. His successful directorial ventures in 1960s included Ghunghat and Arzoo. In 1964 he directed the classic Zindagi starring Rajendra Kumar, Vyjanthimala, Prithviraj Kapoor and Raaj Kumar. In 1968 he won the Filmfare Best Director Award for Ankhen. Ankhen was a spy-thriller starring Dharmendra and Mala Sinha. It was amongst the Top 10 Hindi films of the 1960s.

His films had a lukewarm response at the box-office during the decade of the 1970s and 1980s. In 1985 Sagar turned towards television. His Sagar Arts began producing serials based on Indian history. His Ramayan aired its first episode on 25 January 1987. The series was a huge hit among the audience and he became a household name post the launch of this series. After that, he directed some more mythological series such as Krishna and Luv Kush. He also made some fantasy dramas like Alif Laila and Vikram Aur Betaal which were also well recieved. For his contribution, he was fellicitated with the Padma Shri Award in the year 2000. The last television series that he directed was Sai Baba in the year 2005.