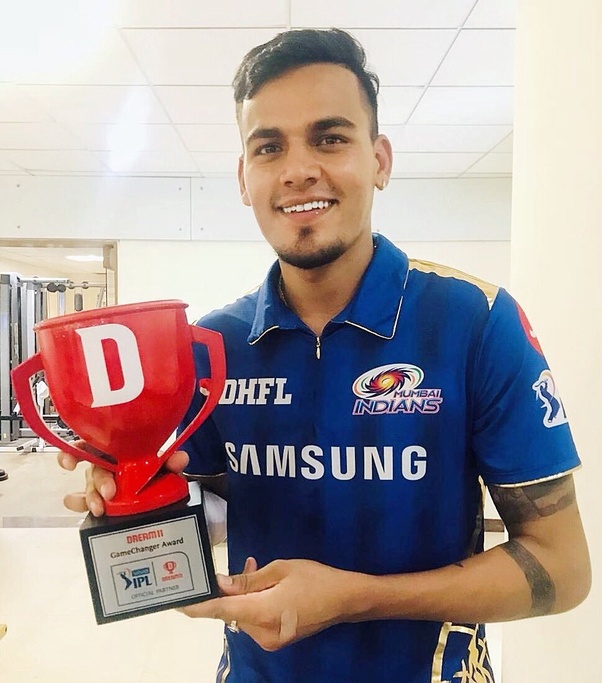 Yet another find of the Indian Premier League, Rahul Chahar recently made his international debut against West Indies. The 20-year old leggie has come a long way since being ignored for the 2018 U19 World Cup. And despite the tough competition for the spinner’s spot in the Indian Cricket team, Rahul is here to stay.

Born in Bharatpur, Rajasthan on 4th August 1999, young Rahul had a Cricket background in his family from a very early age. Rahul’s cousin, Deepak Chahar picked up 8/10 in his first-class debut in the 2010-11 domestic season. Looking at his brother’s success, Rahul decided to divert his complete attention from studies to Cricket.

Young Rahul initially started as a pace bowler just like his brother but later turned to leg-spin after Deepak’s advice. Along with Deepak, Rahul’s uncle also played a huge role in his early days as a cricketer, nurturing and guiding Young Rahul for the future.

Slowly but steadily, Rahul kept moving up the ladder in the domestic circuit, going through each age-level cricket with consistent performances. He made his first-class debut for Rajasthan in November 2016 at the mere age of 17. Playing against Odisha, Rahul picked up 1/24 in his first inning. But in the second inning, the leggie went for 119 runs in 33 overs and just one wicket to show for.

Rahul made his List A debut in February 2015 against Madhya Pradesh in the Vijay Hazare Trophy. He went for 1/48 in just five overs as MP chased down the target of 212 with ease. But his inning of 14 runs in just six balls which included two sixes proved that the youngster can also swing the bat when needed. But Rahul took five more wickets in the next four games he played at the economy rate of 4.

With the performances at the domestic circuit, Rahul was bought by Rising Pune Supergiants (RPS) for IPL 2017. Although he was signed for the base price of ₹10 lakh, Rahul shared the dressing room with MS Dhoni and leggie Imran Tahir for the entire season, bagging invaluable experience in the process. His brother, Deepak Chahar was also part of the RPS squad.

Rahul made his IPL debut against KXIP and opened his account with the wicket of Hashim Amla. He played just two more games in the season and bagged just one more wicket but it was of explosive Brendon McCullum. But Rahul became a household name due to his acrobatic boundary line save.

“When Rahul started playing, he was weak. But he works hard on fitness. Sometimes, I have to stop him. In fact, Rahul does as much fitness as Deepak does. He would follow the fast bowler’s routine, which is why you see he is very fit,” he added.

Rahul is also in a relationship with Ishani, his love interest for four years now.  Rahul’s sister Malti Chahar is a model-turned-actress.

We can’t stay without our daily dose of energy and radiance from Dr Jamuna Pai’s skinlab. The products contain Vitamin C , L Glutathione and powerful anti oxidants. Mostly they are Vegan and Cruelty free. #skinlabhyderabad @skinlabindia