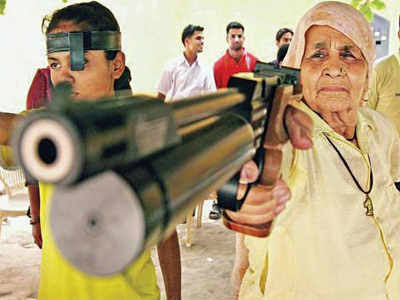 Prakashi Tomar is one of the oldest sharpshooters in the world. She is also called as Shooter Dadi and Revolver Dadi. She is from Johri village of Bhagpat District, Uttar Pradesh. She has won 25+ championships across the country. Prakashi Tomar was born on 1 January 1937 (82 years old as in 2019) in a Hindu jat family at Muzaffarnagar, Uttar Pradesh. She was married to Jai Singh and now living in Johri village with her family. She has eight children and twenty grandchildren.

Her career begun in 2000. Well, it all happened coincidently. Seema Tomar, her daughter joined Johri Rifle Club to learn shooting and Prakashi accompanied her to the academy to encourage her daughter. Her first shot came while she was teaching her daughter Seema to hold the gun. When she shot the target skillfully, she stunned everybody who was present there. Even the coach Farooq Pathan got impressed by her shooting skills and advised her to join the academy. Even though she was a house wife and have to do a number of household works, she managed to continue her training. She practiced for at least 2 years and when she entered a competition, she competed against DIG of Delhi police, Dheeraj Singh and defeated him.

She has won around 25 championships across the country.

Some Facts about Prakashi Tomar A movie named “Saand ki Aankh” starring Taapsee Pannu and Bhumi Pednekar was released on 25 October 2019, which was based on the biographies of Prakashi and her sister-in-law, Chandro Tomar.