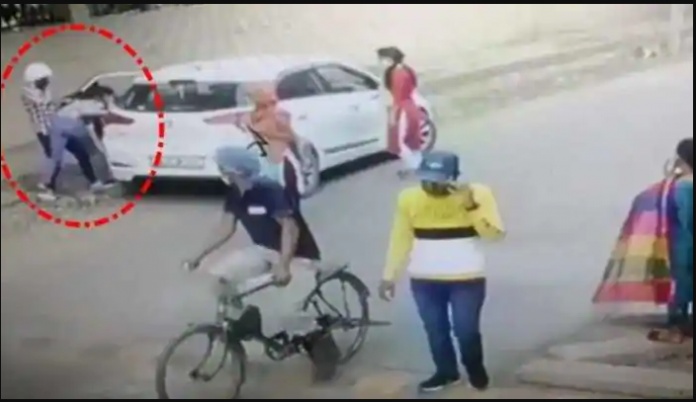 Faridabad: A 21-year-old student in Haryana was shot dead in broad daylight just outside her college by a man who first tried to shove her into his car. The woman’s murder on the streets, barely 30 km from Delhi, has been caught in a frightening video that shows her attempts to save herself before being shot at point blank range.

The incident took place around 3.40 pm on Monday outside a college in Ballabgarh in Faridabad, where the woman, Nikita Tomar, had gone to take an exam. She was a final year commerce student.

The attacker, Touseef, and his friend Rehan, were apparently waiting in a car for her to come out. Touseef and Nikita knew each other and he had kidnapped her in 2018 too, said Faridabad police officer OP Singh.

In the security video, Nikita and her friend are seen near the car, desperately trying to dodge the gun-waving attacker.

The man keeps chasing her before finally shooting her dead. His friend then drags him to the car and they drive off, leaving Nikita bleeding on the road, her friend watching in horror. She died in hospital.

“We complained earlier in 2018 about Touseef harassing my daughter and we had withdrawn the complaint to protect our daughter’s name. Now they have killed my daughter,” the father told NDTV.

“My daughter went for an examination at the college. He tried to forcibly make her sit in his car but she refused. After a brief scuffle, he shot her.”

Breathe: Into the Shadows, Cast and Crew, Review and More