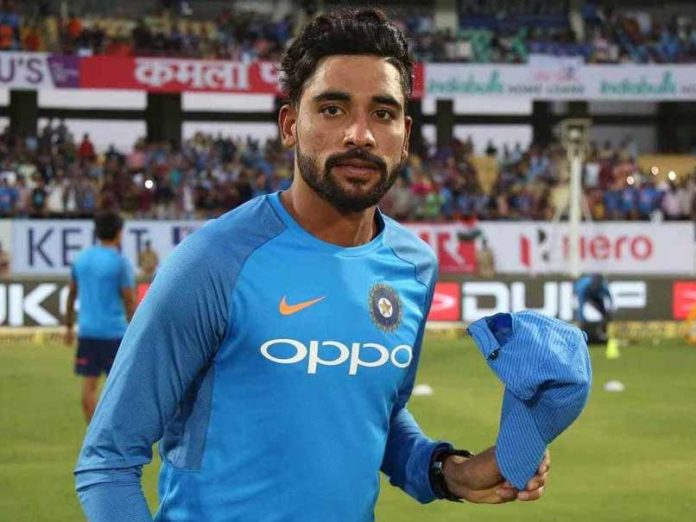 Known for his lethal toe-crushing yorkers, 23-year old Mohammed Siraj is an Indian right arm fast bowler. Siraj was born on 13 March 1994 in Hyderabad and for someone who is self-taught, his rise in the Indian cricket arena has been remarkably swift.

Siraj is a son of an auto rickshaw driver and his childhood was full of hardships due to family’s low income. He never went to a cricket academy or had a coach. Smitten by cricket, he used to play street cricket with a tennis ball and often bunked classes to play.

In 2015, Siraj went to the nets at the Charminar Cricket Club on a friend’s invitation and impressed everyone. He took five wickets in a match and soon his hard work paid dividends as he was named as a probable in the state’s U-23 side.

He then played for the senior zonal side and continued working hard. Siraj made his first-class debut for Hyderabad on 15 November 2015 in the Ranji Trophy and played only one game.

Siraj played only one game in his debut first class season and was waiting to get more opportunities. In the 2016 Ranji Trophy, he performed exceedingly well as Hyderabad made the quarter finals.

Siraj ended up being the highest wicket-taker for Hyderabad and third leading wicket-taker of the 2016 Ranji Trophy, taking 41 wickets in nine matches at an impressive average of 18.92.

He was then picked to play for the Rest of India team and good performances resulted in him being included in the India A squad to tour South Africa in July 2017.

After impressive performances in domestic cricket, Siraj was included in India’s T20I squad to play against New Zealand. He made his T20I debut against New Zealand in November 2017 and took his maiden T20I wicket of Kiwi skipper Kane Williamson. He ended up with figures of 4-0-1-53.

The amazing performances in Ranji Trophy resulted in him being roped by Indian Premier League franchise Sunrisers Hyderabad for a whopping Rs. 2.6 crore which was 13 times his base price.

In 2017 IPL, he played six matches and picked 10 wickets at an average of 21.2, with the best performance of 4/32. A deceptive slower ball and a natural in-swinger make him an effective limited overs bowler.