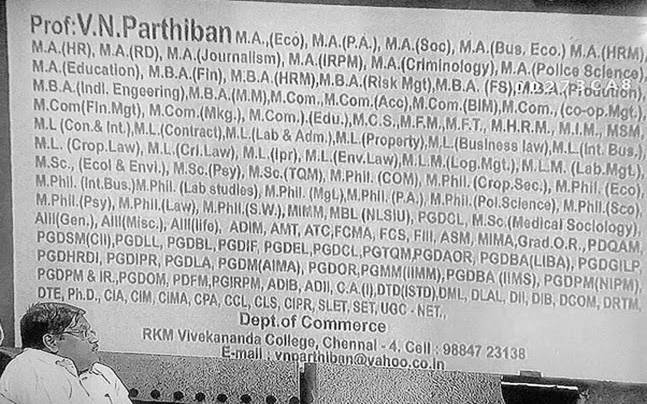 If you thought that doing a master’s degree was enough in the way of educational qualifications, wait till you meet professor VN Parthiban, who has taken education to an unprecedented level of seriousness. Professor Parthiban’s visiting card is bound to leave you a bit dizzy, as 145 educational degrees stare at you, all acquired by him over a lifetime of learning.

The 55-year-old Chennai resident has acquired these degrees over three and a half decades of hard work and commitment. He has 12 M.Phil degrees, 9 MBA degrees, 8 ML degrees, 10 MA degrees, 8 M.Com degrees, and 3 M.Sc degrees, among others. Commenting on his phenomenal educational journey, Professor Parthiban.

“I am from a very ordinary family in north Madras. I struggled hard to finish my first college degree and got a job in the Judiciary department. Then I started to apply wherever they did not require a transfer certificate for registration so that I could study different courses at the same time. In the last thirty years, I have been continuously in the process of preparing for exams and applying for new degrees or diploma courses. All my Sundays, I have some exams or research papers to write.”

Professor Parthiban teaches over 100 subjects in different colleges in the city. He finds studying enjoyable and spends his Sundays in either appearing for exams or writing research papers. Despite his vast knowledge over an impressive array of subjects, Professor Parthiban admits that he finds mathematics difficult. “I failed in Actuarial Sciences. The course required a lot of mathematics, and I didn’t put in enough effort,” he said. A successful and happy man, Professor Parthiban gives full credit to his wife, who holds the family together and has raised their two children. She works in a bank and has nine academic degrees. As for Professor Parthiban, he does not intend to stop. “I am planning to join more courses,” he told The Huffington Post.