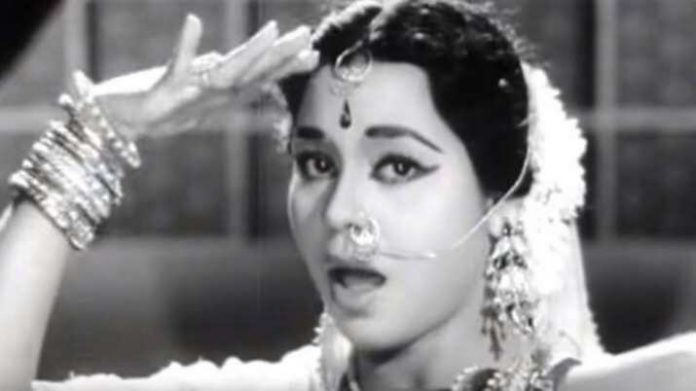 Kumkum, born Zaibunnissa (22 April 1934 – 28 July 2020) was an Indian film actress from Hussainabad in Sheikhpura district, Bihar. Her father was Nabab of Hussainabad and belonged to a highly reputed family. She acted in almost 115 films in her career. She is best known for her roles in Mr. X in Bombay (1964), Mother India (1957), Son Of India (1962), Kohinoor (1960), Ujala, Naya Daur, Shreeman Funtoosh, Ek Sapera Ek Lutera, Ganga Ki Laharen, Raja Aur Runk, Aankhen (1968), Lalkaar, Geet and Ek Kuwara Ek Kuwari. She paired with many film heroes of her era and was popular in roles alongside Kishore Kumar.

Kumkum was discovered by Guru Dutt. Guru Dutt was to picturise the song “Kabhi Aar Kabhi Paar Laaga Teere Nazar” for his movie Aar Paar (1954) on his friend Jagdeep (father of Javed Jaffery, Naved Jaffery), but later decided to picturise this song on a female actor. But at that time, no one agreed to do a small song. Then Guru Dutt finally picturised this song on Kumkum. Later, Kumkum was seen in a small role in Pyaasa (1957). The famous song “Yeh Hai Bombay Meri Jaan” from C.I.D (1956), sung by Geeta Dutt was picturised on her. She was also paired alongside Shammi Kapoor in a side role in Mem Saheb (1956) and also in lead opposite Shammi Kapoor in Char Dil Char Raahein (1959). 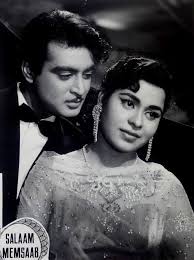 She was trained in Kathak by the famous Pandit Shambhu Maharaj. She showed her dancing talents in the film Kohinoor (1960) with Dilip Kumar. “Madhuban Mein Radhika Nache Re” and “Haye Jaadugar Qaatil, Haazir Hai Mera Dil”, sung by Asha Bhosle for Naushad were picturised on Kumkum. She was paired opposite Kishore Kumar in films like Ganga Ki Laharen, Shreeman Funtoosh, Haaye Mera Dil and Mr. X in Bombay. The songs like “Khoobsurat Haseena” from Mr. X in Bombay, “Ijazat Ho Toh” from Haaye Mera Dil, “Sultana Sultana” from Shreeman Funtoosh and “Machalti Hui” from Ganga Ki Lahren, which were picturised on the pair Kishore-Kumkum remain popular since their release till date. She has been a favourite choice for writer director Ramanand Sagar.

After her marriage, she left the industry.