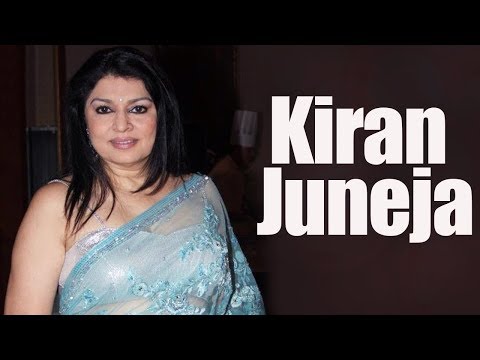 Kiran Juneja is an Indian film Actress andProducer, who has worked mostly in Bollywood. She has worked in popular movies like Shimla Mirchi, Sahi Dhandhe Galat Bande . Her recent film was Shimla Mirchi in the year 2020.

Kiran got her fame in the Hindu epic, Mahabharat, in 1988, where she played the role of Ganga. She started her acting career on the big screen with the film Mulzim in 1986. She played the role of Jeetendra’s sister in the film. Some of her famous Bollywood presences include Humshakal, Madam X, Barsaat and Zamana Deewana.

Kiran also anchored for quite some time in STAR plus channel. She also won the Miss India title during college. Besides acting, she is also a model for products like Nivea, Vimal and more.

In addition she is established an NGO named Respond Foundation, which helps the new artist’s in the industry to showcase their talent.

She known for her character Ganga, played in “Mahabharat” in 1988. It was the largest hit and very popular show of that time. After that, she was seen on the popular show on Zee TV “Sindoor” as Kavitha Raizada.

She was born in Delhi, India. Her father was a doctor. She is a past Miss India. She married to the famous filmmaker of Bollywood “Ramesh Sippy”. She is his second wife. She is the owner of the company “Kiran Chitra Enterprises. She did modeling for brands like Vimal, Nivea, and Lakme. She worked with Jitendra, Hema Malini, and Shatrughan Sinha.