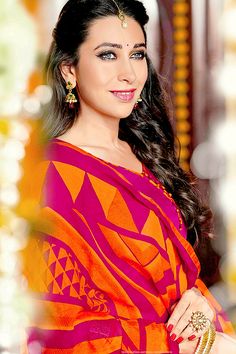 Karisma Kapoor, elder sister of Kareena Kapoor is a known figure in Bollywood. She is celebrating her 44th birthday on 25th of this month. This Indian film actress was the most popular and she was the highest-paid Hindi film actress in the late 1990s and early 2000s. She has received many appreciations. She has won four Filmfare Awards. Along with it, she received several accolades which included a National Film Award.

Though she is well known as Karisma Kapoor, but her loved ones call her Lolo. She is 43 years old now. She is the daughter of Randhir Kapoor, a veteran actor. Her mother was Babita who was also an actor. She loves to do Power yoga and swimming. She is 5′ 4″ in height. Her weight is 53 Kg. Her figure measurement is 35-24-34. She debuted with film Prem Qaidi in Bollywood. It was released in 1991. She loves to have Cakes, fried chips and biryani. She says that she gets inspired by Shah Rukh Khan, Aamir Khan and Brad Pitt. All the three of them are her favourites. Nargis and Meena Kumari are her favourite actresses. She loves to spend her vacation in London and Paris. They are her favorite holiday destinations. She loves to use perfumes. Romance by Ralph Lauren is her favorite one. The life of Karishma Kapoor has been full of criticisms and relationship failures. It is said that she was in a relation with Ajay Devgan (Actor), Abhishek Bachchan (Actor), Sandeep Toshniwal (Businessman). She married to Sanjay Kapur in 2003. He was a well-known businessman. But this marriage could not last long. Unfortunately they took divorce in 2014. She has given succeeded in Bollywood but could not manage her personal life. She had a daughter named Sameera Kapoor and a son named Kiaan Raj Kapoor.

She has worked in many hit movies. Some of them are Jigar (1992) and Anari (1993), the comedies Raja Babu (1994), Coolie No. 1 (1995) and Saajan Chale Sasural (1996), and the thriller Jeet(1996). But she never tried anything new and so her career graph decreased with time. She was also criticized to work only in male-dominated films. Raja Hindustani proved to be the turning point in her life. She won Filmfare Award for Best Actress for it. She also won National Film Award and Filmfare Award for Best Supporting Actress for her role in Yash Chopra’s blockbuster musical romance Dil To Pagal Hai. “Dil dhadakne do” at IIFA on June 6