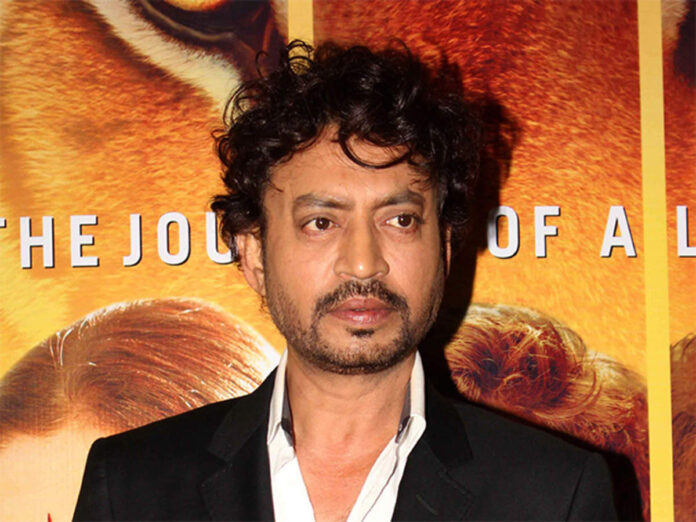 Irrfan Khan (7 January 1967 – 29 April 2020) was an Indian actor, known for his work predominantly in Hindi cinema, in addition to British and American films. In a career spanning almost 30 years and featuring in more than 50 domestic films, Khan had received numerous awards, including a National Film Award and Filmfare Awards in four categories. Film critics, contemporaries and other experts consider him to be one of the finest actors in Indian cinema. In 2011, he was awarded the Padma Shri, India’s fourth highest civilian honour.

Khan made his screen debut with a small role in Salaam Bombay (1988), with was followed by years of struggle. After starring in the British film The Warrior (2001), he had his breakthrough in 2003 with starring roles in the dramas Haasil (2003) and Maqbool (2004). He went on gain critical acclaim for his roles in The Namesake, Life in a… Metro (2007), and Paan Singh Tomar (2011). The last of these earned him the National Film Award for Best Actor.Further success came for his starring roles in The Lunchbox (2013), Piku (2015) and Talvar (2015), and he had supporting roles in the Hollywood films The Amazing Spider-Man (2012), Life of Pi (2012), Jurassic World (2015), and Inferno (2016). His highest-grossing Hindi film release came with the comedy-drama Hindi Medium (2017), which won him the Filmfare Award for Best Actor. His final appearance was in its sequel Angrezi Medium. (2020)

Khan was born in Rajasthan to a Muslim family. Khan’s mother, Begum Khan and his father, the late Jagirdar Khan, were from the Khajuriya village near the Tonk district and ran a tire business. Irrfan and his best friend Satish Sharma were good at cricket and later, Irrfan was selected for the CK Nayudu Tournament for emerging players under 23 years as a stepping stone to first-class cricket in India. However, he could not turn up for the tournament owing to a lack of funds.

Khan moved to Mumbai, where he acted in numerous television serials, including Chanakya, Bharat Ek Khoj, Sara Jahan Hamara, Banegi Apni Baat, Chandrakanta, Shrikant (Doordarshan), AnooGoonj on Doordarshan, Star Bestsellers (Star Plus), and Sparsh. Earlier, he had acted in a teleplay on Doordarshan named Laal Ghaas Par Neele Ghode where he played Lenin. It was based on a translation by Uday Prakash of a Russian play by Mikhail Shatrov. He was the main villain in a series called Darr (which aired on Star Plus), where he played the role of a psycho serial killer, opposite Kay Kay Menon.

He also played the role of famous revolutionary Urdu poet and Marxist political activist of India Makhdoom Mohiuddin in Kahkashan, produced by Ali Sardar Jafri. He acted in some of the episodes of Star Bestsellers (aired on Star-Plus). In one of the episodes (“Ek Sham Ki Mulakat”), his role was of a parchoon shopkeeper who has a misconception that his landlord’s wife is trying to seduce him and it turns out that his own wife (Tisca Chopra) is cheating on him. In the other one, he played the role of an office accountant who, after being insulted by his female boss, took revenge.

He also appeared in a serial called Bhanvar (aired on SET India) for two episodes. In one episode, he performed the role of a thug who somehow lands in court. Theatre and television kept him afloat until Mira Nair offered him a cameo in Salaam Bombay! (1988) though his role was edited out in the final film.

In the 1990s, he appeared in the critically acclaimed films Ek Doctor Ki Maut and Such a Long Journey (1998) and various other films which went unnoticed. In 1998, Khan played role of “Rantnakar” the Bandit, aka “Valmiki” who was BANDIT and turned into the well known Monk / Poet who wrote “The Ramayana” in Sanjay Khan’s serial “Jay Hanuman”. After many unsuccessful films, things changed when London-based director Asif Kapadia gave him the lead in The Warrior, a historical film completed in 11 weeks on location in Himachal Pradesh and Rajasthan. In 2001 The Warrior opened in international film festivals, making Khan a known face.

In 2003–04 he acted in Ashvin Kumar’s short film, Road to Ladakh. After the film received rave reviews at international festivals, the film was being made into a full-length feature starring Khan. That same year he played the title role in the critically acclaimed Maqbool, an adaptation of Shakespeare’s Macbeth.

His first Bollywood lead role came in 2005 with film Rog. His performance was praised by critics; one wrote, “Irfaan’s eyes speak louder than his words and every time he is in frame, be it talking to his buddy Manish or arguing with Suhel, he shows his capability as an actor”. Thereafter he appeared in several films either playing the leading role or a supporting role as a villain. In 2004 he won the Filmfare Best Villain Award for his role in film Haasil. Critics praised his performance in Haasil, saying that “as the ambitious, brash, fearless goon who is mind-blowing. He is outright scary and makes you sit up, wondering what he’ll do next”.He also played an antagonist in the Telugu film Sainikudu.

In 2007, he appeared in the box office hits Metro, for which he received a Filmfare Best Supporting Actor Award, and The Namesake. His chemistry with Konkana Sen in Metro was one of the highlights of the multi-star movie. They were closely followed by his appearance in the international films A Mighty Heart and The Darjeeling Limited.

In September 2015, he was appointed as the brand ambassador for “Resurgent Rajasthan“, a campaign by the state government of Rajasthan. He lent his voice to the light and sound show at the war memorial for the Indian army at Vidhan Sabha Road, Jaipur. This show portrays the valour and courage of the Rajasthani soldiers and their historic and modern triumphs in battle.

Sikdar said about him, “He was always focused. I remember when he would come home, he would head straight for the bedroom, sit on the floor, and read books. The rest of us would be hanging around gossiping.” Even now, as he reads through at least one new Hollywood script a week, he believes in doing his homework, staying up till 3 in the morning, taking notes, trying to understand ways to play his character. Sikdar recalls how he would demand as many as 11 rewrites from her when he directed episodes of Banegi Apni Baat. “Once he dragged me to a police station in Mumbai to understand procedure,” she recalls. In 2012, he changed the spelling of his name from “Irfan” to “Irrfan” and has said he likes the sound of the extra “r” in his name.

In February 2018, Khan was diagnosed with “undisclosed disease” and it was speculated by many media outlets that he has “brain cancer”.After much speculation, the actor took to his Twitter account and announced that he would “share his story” in “a week – ten days” and asked the media and fans not to “speculate” anything.On 16 March 2018, Khan announced through a Twitter post that he was suffering from a neuroendocrine tumor.He traveled to London for treatment.

In March 2018, Irrfan Khan was diagnosed with a neuroendocrine tumor, a rare form of cancer that can target various parts of the body. He was admitted to Mumbai’s Kokilaben Dhirubhai Ambani Hospital on 28 April 2020, where he was taking treatment for colon infection. He died the following day, at age 53, from the infection.

On April 29 Actor Irrfan Khan has died in Mumbai, he was admitted to Kokilaben Dhirubhai Ambani Hospital with a colon infection. He was 53. The acclaimed actor battled a tumour for several months and returned to Mumbai a few months ago after being treated in the UK. Irrfan Khan is survived by his wife Sutapa and two sons.