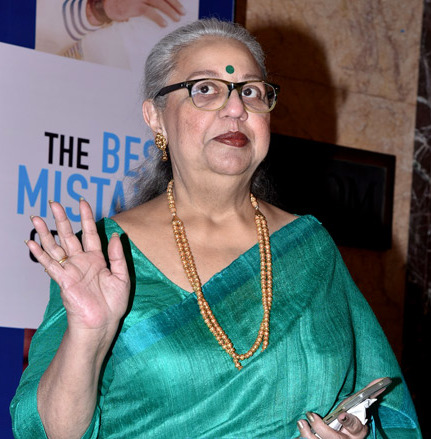 Honey Irani was born on 25-08-1955 in Mumbai, Maharashtra in India. She is a famous veteran Bollywood Actress and Screenwriter.

Enormously talented Honey began her acting career in Bollywood as a child artist in the movies like “Bombay ka chor”, “Chiraag Kahaan Roshni Kahaan” to name a few.  She has acted in more than 72 Films.
Multitalented Honey made a second career for herself in the same industry as the writer of film scripts. She debuted as a Screenwriter in 1991 with Yash Chopra’s movie “”Lamhe” and even won the prestigious Filmfare Award for the Best Story that year.
Irani’s most successful works as a Screenwriter were in movies like “Aaina” in 1993, 2000’s super hit blockbuster movie “Kaho Naa… Pyaar Hai”, “Kya Kehna” in 2001, “Koi… Mil Gaya” in 2003. Honey has thrice won the Filmfare Award for the best story and Screenplay in her career.
Zoroastrian Honey was married to Javed Akhtar, who is also one of the most celebrated Writers of India and Bollywood but later divorced him in 1985. They have two children together, daughter Zoya Akhtar and son Farhan Akhtar. Both of them are celebrated filmmakers in Indian Film Industry.

She was married to Indian Poet Javed Akhtar from 1972 to 1985. She has two sisters named actress Daisy Irani and Menaka Irani. Indian film director Zoya Akhtar is her daughter and Indian film actor and director, playback singer Farhan Akhtar is her son. Choreographer, filmmaker Farah Khan is her niece. Filmmaker Sajid Khan is her nephew.