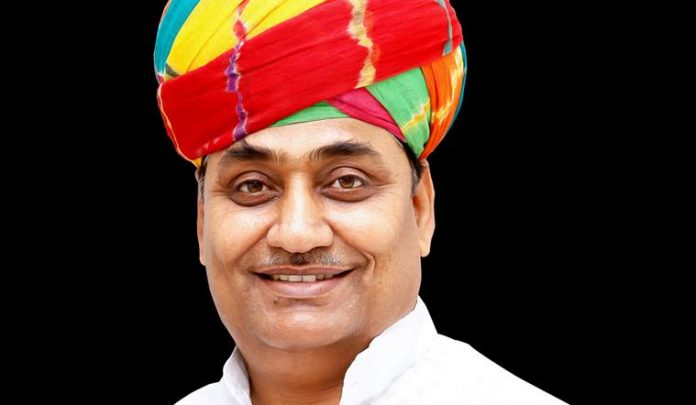 Govind Singh Dotasra (born 1 October 1964) is currently the Minister of State for primary and secondary education (Independent Charge), he is also the Minister for Tourism and Devasthan in the Government of Rajasthan. He is a member of the 15th Rajasthan Legislative Assembly and Ex-Deputy Whip of Congress in the Rajasthan Legislative Assembly. He represents the Laxmangarh (Hindi: लक्ष्मणगढ़) constituency of Sikar district of Rajasthan since 2008. He is an active member of the Indian National Congress since 1981.

Congress Party leadership decided to give a larger responsibility to Dotasra ahead of 2018 Rajasthan polls by appointing him as Chairman of Media and Communication Committee on 5 October 2018.

Govind Singh Dotasra was born to Late Sri Mohan Singh Dotasra and Rupi Devi on 1 October 1964 in a village Kripa Ram Ji ki Dhani (Hindi: कृपा राम जी की ढाणी), Sutod, Laxmangarh in Sikar District of Rajasthan. His father Mohan Singh Dotasara was a government teacher. His schooling took place in the native village and after that, he did B.Com., B.Ed. and LL.B. from the University of Rajasthan. On 4 March 1984, he was married to Sunita Devi. They have two sons and wife Sunita Devi is a government teacher. After graduation, he started practicing LAW in the Sikar Court and for nearly 20 years he has been named as one of the best-known lawyers in Sikar.

Dotasra stepped into politics in 2005 and successfully contested the panchayat elections. He was elected as Pradhan of Panchayat Samiti, Laxmangarh, Sikar (Rajasthan) in 2005.

In 2008, he contested the Rajasthan Legislative Assembly election for the first time and won the seat of Laxmangarh by a close margin of 34 votes against independent candidate Dinesh Joshi.

In 2013, he defeated former union minister of state and 3 time MP Subhash Maharia with a margin of 10,723 in the Rajasthan Legislative Assembly election. In this election his party Congress had lost 160+ seats in the state. He is also a member of the Public Accounts Committee of Rajasthan Assembly 2015–16.

In the position of opposition whip, he upheld the true spirit of democracy in bringing meaningful opposition in the house.

Dotasra actively participates in all sessions of Vidhasabha. He has actively raised public issues in the house, especially issues related to farmers and weaker sections of society. His orating skills, attacking stances have brought about government to address important issues and made him popular among masses. In 2018, he successfully won the Rajasthan Legislative Assembly election and has made a hat-trick of victory at Laxmangarh seat of Rajasthan with a landslide margin of 22052 votes, which is highest in whole Sikar district.

Dotasra represented Rajasthan Legislative Assembly in 24th Commonwealth Parliamentary Association (CPA) Seminar from 27 May – 1 June 2013 in Singapore. Dotasra participated in the 16th and 17th All India Whips’ Conference in Goa and Visakhapatnam.

Govind Singh Dotasra receiving the honor of best MLA from the speaker of Rajasthan Legislative Assembly, Kailash Meghwal on 6 March 2018