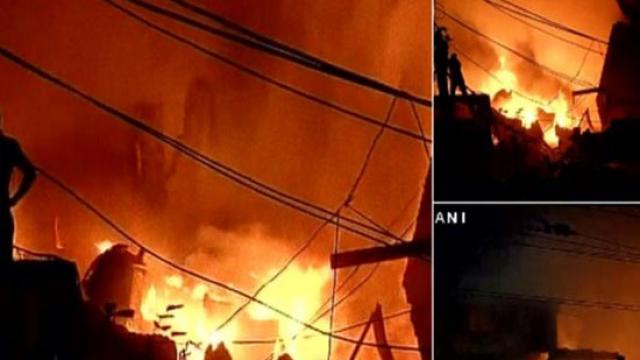 A very hurting news came out from the national capital Delhi on Sunday morning. A huge fire broke out in a building placed in the grain market on Rani Jhansi Road. So far 43 people have been reported dead due to fire and suffocation while dozens of people have been injured. The injured have been admitted to different hospitals in Delhi. The fire has been controlled. The rescue operation is over. NDRF also reached the spot. Relief and rescue operations are going on. The area in which the fire broke out is also called Filmistan. Most of the dead were workers who are said to be residents of Bihar. The factory was built on different floors of the building where the fire broke out. People were sleeping after work late at night .

An eyewitness says people were sleeping after working late at the factory. According to the information, a fire broke out in a factory near Grain Mandi on Rani Jhansi Road this morning. The workers were sleeping inside the factory. Most of the people have died of suffocation. There was a stir in the area after the incident. People started running here and there. According to the information, a building caught fire in the grain market. The fire was so terrible that 30 fire engines arrived to control the fire. However, on seeing the fire, it continued to grow. After the incident, the injured were rushed to a nearby hospital. At the same time, 40 people have been saved in this fire.

Chief Minister of #Delhi Arvind Kejriwal arrives at the spot of fire incident on Rani Jhansi Road; 43 people have lost their lives in the incident. #DelhiFire pic.twitter.com/I0foxyfUX7

However, the relief operation is still going on. The incident is at 5 am in the morning. Where there is a three-story bakery. There was a fire on the upper floor of three adjacent bakeries. Due to the fire, there was smoke everywhere in the area. At the same time, due to the area being quite congested, the fire spread more .. Black smoke is coming out of the windows of the house, which shows that there was a huge fire inside. The cause of the fire has not been known.

On this incident, Delhi Fire Service Deputy Chief Fire Officer Sunil Chaudhary said, the fire has been controlled. At the same time, more than 30 fire engines are on the spot and relief work is going on. Fire officials say that this is the largest rescue operation in Delhi.