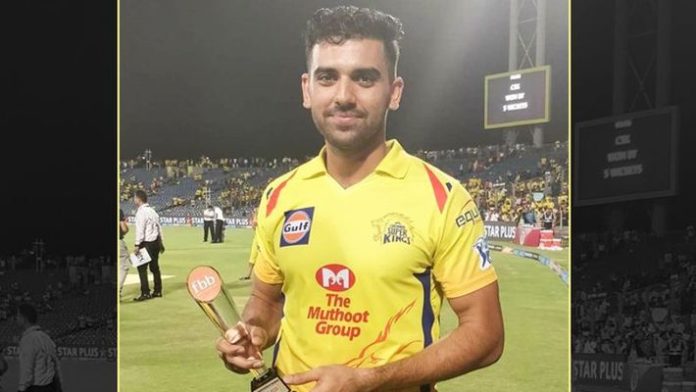 Deepak Chahar was born on 07-08-1992 in Agra in the state of Uttar Pradesh, India. He is an Indian Cricket Player.

Deepak Chahar is an Indian cricketer who is currently playing for the Rajasthan. He is a right-handed batsman and right-arm medium fast bowler. Deepak came in the limelight for selectors when he took the 8 wickets for 21 runs against Hyderabad. Occasionally occurring injuries have been always coming in his path. He got selected in the Rajasthan Royals team and then in the Rising Pune Supergiants team in the Indian Premier League. He admits that it was a dream come true for him when he was selected for the Indian Premier League team.
He came to the limelight after the 2018 IPL where he played for CSK. It was Mahendra Singh Dhoni who used him exceptionally well and gave him the confidence to bowl in the power plays. He was their leading wicket-taker in IPL 2018 and it was a matter of time that he get his maiden call up. He finally got his maiden call up when India toured England in July 2018. He was a part of the T20I squad. His debut series wasn’t that great but he spearhead the bowling attack in absence of Jasprit Bumrah and Bhuvneshwar Kumar when Bangladesh toured India in 2019. In the decision when the match and series were slipping out of India’s hands, it was he who gave the performance of a lifetime and picked up 6 wickets conceding just 7 runs. That spell also included a hattrick and thereby became the first Indian bowler to take a hattrick in the T20I. His figures of 6 for 7 are also the best bowling figure in T20I by any bowler in the world. This spell of him has surely earned him a berth in the squad which will travel to Australia fir the ICC World T20.