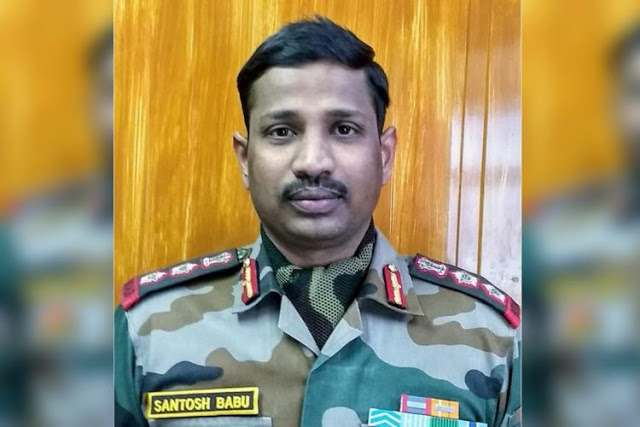 Colonel B. Santosh Babu was the Commanding officer of the 16th Bihar Regiment. His battalion was involved in the bloody face off with the Chinese forces on 15th June, Monday Night. Unfortunately, Col. B.Santosh was killed in action while protecting his motherland, along with two others.

Indo-China Clash: Telangana regret the death of Col. Bikkamalla Santosh Babu on Tuesday, who laid down his life along with two other fellow jawans “Havildar Palani” and “Sepoy Ojha” fighting for his country against the Chinese troops on Monday night in faraway Galwan Valley on the Indo-China border.

According to Col. father :

“I was informed that my son and two other soldiers slipped and fell in the Valley. After some time other Army officers found them dead,” Upender said, adding, “I, in fact, wanted to become a soldier. My dreams came true when my son joined the Army.”

Hailing from Telangana, Colonel Santosh was known for being on the front in many operations against terrorists in Jammu & Kashmir. He had recently joined the unit at Galwan valley on emergency basis.  He was leading the team which went to remove the illegal tent put up by Chinese inside the Indian side of (Line of Control) LAC. Unfortunately, he was trapped in a well – planned strategy of Chinese forces. He was killed by drowning into the lake water (by force or accidentally is not known yet).

Santosh was the only son of his parents and they are feeling proud on their son who has sacrificed his life for the nation.

Job Profile: He joined the Army in 2004 and his first posting was in Kashmir. After his schooling from Korukonda Sainik School he then trained at the National Defence Academy, Pune and the Indian Military Academy, Dehradun.

He killed three infiltrators in an army operation across the Indo-Pak border in 2007.