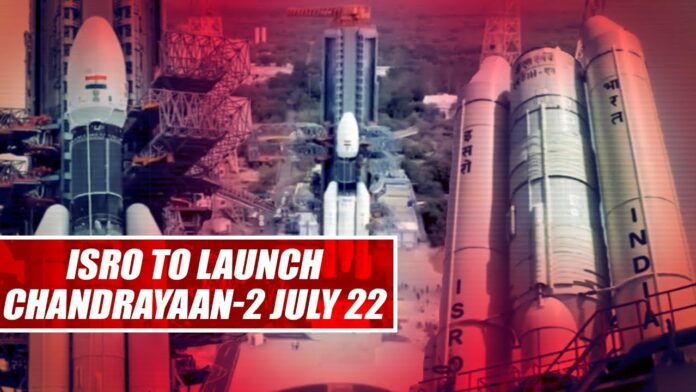 Scientists of the Indian Space Research Organization (ISRO) had stopped it at 1.55 pm after the announcement from Mission Control Room 56 minutes 24 seconds before the launch of the mission on 15 July. Many veteran scientists also praised ISRO for this step. They said that taking action in a hurry could lead to a bigger accident. Three days earlier it was announced the new date for launch was announced. ISRO announced that countdown for 20 hours was started for launch on Sunday evening at six o’clock for 43 minutes. Do you know certain things about Chandrayaan Mission

1- Chandrayaan-2 will be launched from Sriharikota Satish Dhawan Space Center . Chandrayaan will take 48 days to reach the moon. Following the success of this mission, India will be among the 4 countries that have made soft landing on the moon. Soft landing is so dangerous that so far America, Russia, China have been able to accomplish this feat.

2- Chandrayaan-2 will land on the southern pole of the moon. Earlier, no country has landed in the South Pole of the Moon. With this, India will be the first country to land here.

3- The south pole is quite dark. There is no sunlight radiating there too. Therefore, no country dares to land there till today.

4- The temperature of this region of the moon is also very low, so scientists expected to get ice or water there. Earlier Chandrayaan-1 had also discovered water on the moon. Who made the world wonder.

5- The cost of construction of Chandrayaan-2 is 978 crores. It is made up of indigenous technology in a whole manner. Its main purpose is to study the quantity of water on the moon, to know the minerals present on the moon, to know about the circumstances, to study the atmosphere of the moon. There are several types of cameras, radars in Chandrayaan-2, which can be studied in depth about the moon.

6- Chandrayaan-2 will be sent from the Bahubali rocket to the moon. The name of this rocket is GSLV Mk 3. It is known as the Bahubali Rocket. This is one of the most powerful rockets. Its length is 44 meters and its weight is 640 tonnes.

7. Chandrayaan-2 Yan is also very special in itself. The weight of this vehicle is 3800 kg. Its total expenditure is 603 crores rupees. There are 13 payloads in Chandrayaan. It includes 5 of India, 3 in Europe, 2 in America and 1 payload of Bulgaria. Chandrayaan-2 also has 3 modules. 8- They are named Arbiter, Lander and Rover. Lander named after ISRO’s father Dr. Vikram A. Sarabhai. At the time the mission was launched, more than 250 scientists were monitoring the mission in ISRO’s mission control center.

Prime Minister Narendra Modi: K Sivan ji (ISRO Chief) , congratulations to you and to the entire team of ISRO on the successful launch of #Chandrayaan2. This successful launch is a matter of pride for the countrymen. pic.twitter.com/53ERD8YUFl

8- They are named Arbiter, Lander and Rover. Lander named after ISRO’s father Dr. Vikram A. Sarabhai. At the time the mission was launched, more than 250 scientists were monitoring the mission in ISRO’s mission control center.

Prime Minister Narendra Modi has tweeted in celebration of the launch of India’s second moon Mission Chandrayaan-2, saying that it illustrates the ‘prowess of our scientists’ and the determination of 130 crore Indians to ‘scale new frontiers of science’. “Special moments that will be etched in the annals of our glorious history!” he says.

Special moments that will be etched in the annals of our glorious history!

The launch of #Chandrayaan2 illustrates the prowess of our scientists and the determination of 130 crore Indians to scale new frontiers of science.

Section 66 A Information Technology Act Shut down by Supreme Court...