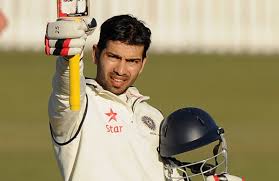 Naman Ojha is an Indian former cricketer who represented India in international cricket for India against Sri Lanka on 2015 he was born on 20 July 1983. Naman Ojha was named as a captain of India A Team.

In 2001 ojha made his first class debut for Madhya Pradesh represented Rajasthan Royals in 2009 IPL in South Africa open the batting for the  Rajasthan Royals ana played some important innings. In July 2014 when playing for India A in an unofficial test Naman scored and unbeaten 219

Ojha made his career debut for madhya pradesh in 2000. In 2008 Challenger trophy he score 96 for India green. 2013 ojha hit the 10th century of his  first class career in Madhya Pradesh is first innings against Bengal this was ojha’s first 50 + score in 13 innings.

In March 2014 Ojha scored 94 nearly headed Madhya Pradesh to victory but tight bowling from Railways resulted in MP falling 8 runs short. In his hundred first class Match Ojha scored hundred in both innings while playing for India A against Australia A. in 2018 he was bought by Delhi Daredevils in 2018 IPL auction.

Naman Ojha as senior debut came when he was included as a backup wicket keeper in the T20 side for India’s 2010 tour of Zimbabwe. His test debut came at the age of 32 in 2015 in the third test of India’s tour of Sri Lanka after wicket keeper wriddhiman Saha had to side out due to a hamstring injury.

Naman Ojha has retired on 15th February 2021. He announced that he he is taking retirement from all formats of cricket. After first class career Naman Ojha is a retired.