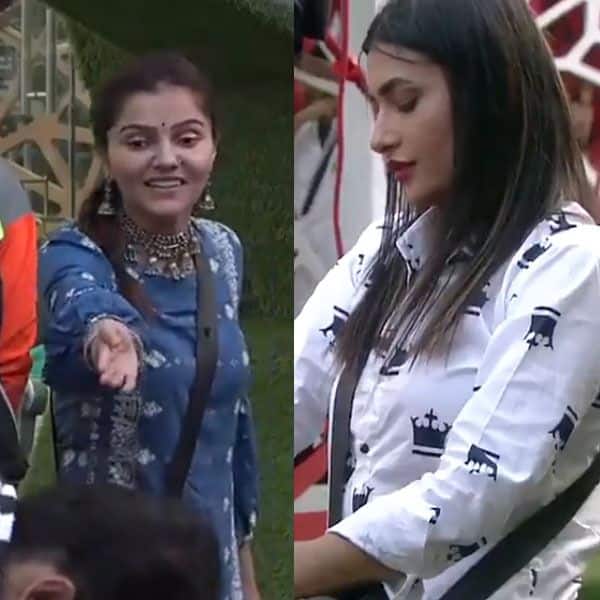 Bigg Boss 14 house was full of drama today. The show has turned out to be really interesting and today was a hectic day. It was a nomination special episode and the contestants left no stone unturned to save themselves from nominations. The contestants were given a task to be played in pairs. Each pair has to sit on a spaceship and then debate as to why one should be safe and in the green zone of the house, while the other should be nominated and be restricted in the red zone. A mask on the table will decide their fate. As per the red, yellow and green signals, the contestants have to ensure that they retain the mask in their hand to make their way into the green zone. However, if both the contestants do not have the masks with them by the end, then both of them will be sent to the red zone. Rahul Vaidya and Nikki Tamboli go first. Nikki reaches the spaceship and grabs the mask even before Rahul Vaidya could even reach there. Rahul asks her to keep the mask in the center as he was not even on the spaceship when she grabbed it.

agree and asks him to begin the debate. She tells him he is not entertaining like her and Rahul gives it back by saying that if shouting and talking continuously is entertaining then Nikki is wrong. They go on talking and Rahul keeps requesting Nikki to keep the mask. She does not agree and Rahul tries to snatch it from her but she does not give and goes away. She then puts the oxygen mask in her pant so that Rahul cannot touch it. Rahul asks her not to play this dirty move but she does not listen. In the end, all the contestants go against Nikki and say that she has played it in a cheap way. Rahul Vaidya cries because of Nikki’s unexpected move. However, Twitter is divided over this oxygen mask fight between Rahul and Nikki. Some of the fans feel that this was a cheap move while some feel Nikki was right in doing that. A few have praised Rahul for playing well with respect. Some feel that Nikki was not wrong in hiding the mask in her pant. Take a look at the reactions here:

#RahulVadiya Winning hearts again and again ?❤❤❤❤❤❤ @rahulvaidya23 ! So cheap #NikkiTamboli Well we can expect this kinda behavior from u ! SO CHEAP

I take my Tweet back .. Saw repeat episode now How Nikki played the task ..

Didn’t expected this from Nikki
Absolutely unfair & Dirty .
????
She is too Strong contender but playing such way is too bad ?#BB14OnVoot #BB14#NikkiTamboli

What #NikkiTamboli did was to wrong and totally unfair . I am so proud of #RahulVadiya that he maintained his dignity #iamproudrahulfan

Everyone is against #NikkiTamboli but was their mutual agreement? If not then #RahulVaidya being stronger would have snatched away the mask… Would that have been fair? Smart move by #NikkiTamboli @BeingSalmanKhan @justvoot @VootSelect

Nope. Nothing wrong. But she could be more fair from the beginning as #RahulVaidya only trusted in her. Though I would she has done the best #NikkiTamboli can. Jasmin and Jaan ne bhi kiaa. Same.

What #NikkiTamboli did today was freaking disgusting as always

#NikkiTamboli has more self respect, dignity than all RahulVaidya and his fans combined. She ain’t afraid to stand up for herself, doesn’t compromise her self-worth for no man.#BiggBoss14 #BB14

What #NikkiTamboli did was so damn cheap. How can someone fight with her when she can hide the oxygen mask in her pants.Kese ladta #RahulVadiya aisi situation mei?He went blank.Ladke kuch bhi karde to ilzam lagana asan h.Rahul haar kar b respect jeet gaya #biggboss14 #bb14

What #NikkiTamboli did in the task today was INAPPROPRIATE for national television…but not wrong as regards the task rules.
Once she shoved the mask down her pants, the best thing #rahulvaidya could do was back off.#bb14 #Biggboss14

The only contestant who can match the level of #NikkiTamboli is #swamiom
Nikki = Swami Om
✌??

Hantavirus in China : know what are the symptoms and...