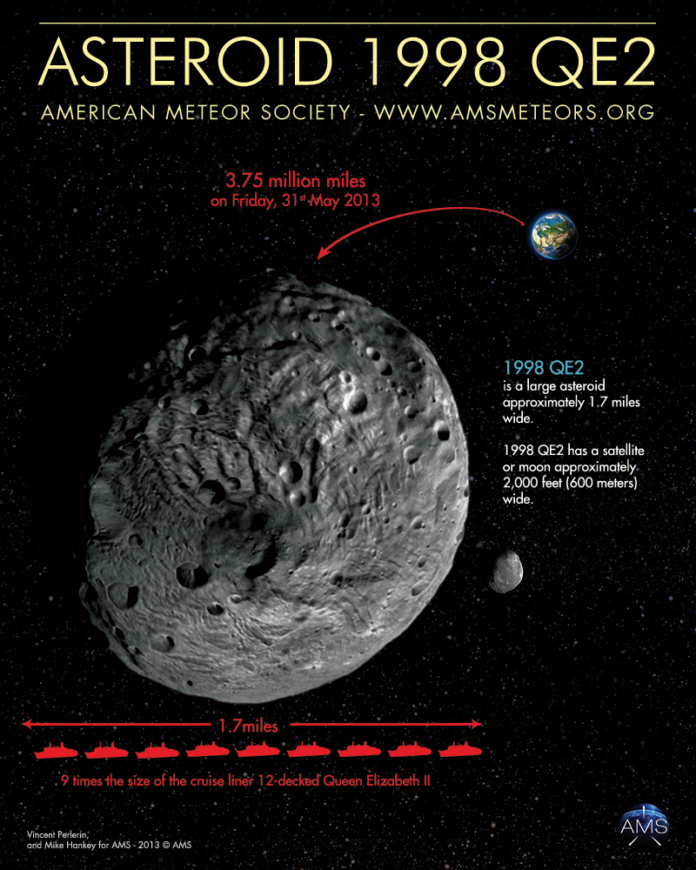 The 2-kilometer-wide asteroid passing by the Earth will provide astronomers with an exceptional opportunity to study the object in great detail.

A large asteroid, 1998 OR2, will safely fly by within 6.3 million kilometers of Earth on Wednesday, and scientists have stressed that it poses no danger to Earth. The 2-kilometer-wide asteroid passing by the Earth will provide astronomers with an exceptional opportunity to study the object in great detail.

Scientists have reiterated that there is no need to panic as there is zero chance that the asteroid will hit Earth during the flyby. The object will fly 16 times further than the distance to the Moon and although it seems like a close shave in the context of the visible universe the distance is over 90 billion light-years. It is to be noted that the moon orbits Earth at an average distance of 385,000 km.

The 1998 OR2 asteroid is 1.5-mile-wide (2-kilometer-wide) and will get no closer than about 3.9 million miles (6.3 million kilometers), passing more than 16 times farther away than the Moon. The asteroid will make its closest approach at 5:55 a.m. EDT (2:55 a.m. PDT). While this is known as a “close approach” by astronomers, it’s still very far away.

“The small-scale topographic features such as hills and ridges on one end of asteroid 1998 OR2 are fascinating scientifically. But since we are all thinking about Covid-19 these features make it look like 1998 OR2 remembered to wear a mask,” said Dr Anne Virkki, head of planetary radar at the observatory.

Asteroid, 1998 OR2, a well-known near-Earth object, will safely pass on Wednesday at 2:55am PT (5:55am ET). It will get no closer to Earth than 3.9 million miles. Astronomers will have the opportunity to study it in detail. https://t.co/JAUK1rMa2a@AsteroidWatch @NASASolarSystem pic.twitter.com/ekmhT3PbHF

Almost all near-Earth asteroids (about 98%) of the size of 1998 OR2 or larger have already been discovered, tracked and cataloged. It is extremely unlikely there could be an impact over the next century by one of these large asteroids, but efforts to discover all asteroids that could pose an impact hazard to Earth continue.

When was it discovered?

Asteroid 1998 OR2 was discovered by the Near-Earth Asteroid Tracking program at NASA’s Jet Propulsion Laboratory in July 1998, and for the past two decades, astronomers in Arecibo Observatory in Puerto Rico have tracked it.

Maneka Gandhi’s proposal on extending maternity leave can be a new...