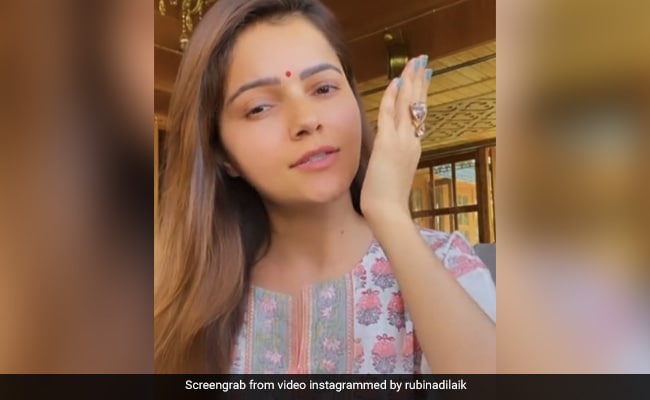 New Delhi: Actress Rubina Dilaik, who is seen in the lead role in the famous television serial ‘Shakti-Astitva Ke Ehsaas Ki’, is in the news. Rubina Dilaik Video had gained a lot of fame from Bigg Boss 14. After Bigg Boss, his fan following had increased manifold. These days, his photos and videos are on social media. The actress recently shared her experiences with fans through a video after recovering from Corona. Rubina Dilac has shared a video in which her husband Abhinav Shukla (Abhinav Shukla) is also seen. Both have expressions on the songs of Funny Neha Kakkar and Rohanpreet Singh. .

Rubina Dilaik has shared a video on her Instagram account. In the video, he has given tremendous expressions on Neha Kakkar’s latest song ‘Khad Tainu Main Dassa‘. Her husband Abhinav Shukla (Abhinav Shukla) is also seen in this video of Rubina. This is an edited video. Through this video, she tells husband Abhinav how much she is missing him. Rubina’s funny expression looks amazing in the video. The song on which Rubina has acted is the latest release song of famous singer Neha Kakkar. Rubina has tagged her husband Abhinav in the video caption, writing, ‘This song reminds me of our noose jhok and how much I miss doing it with you Abhinav Shukla … What a lovely cute song Neha Kakkar and Rohanpreet Singh . You guys are so cute. On this post, Neha Kakkar and her husband Rohanpreet Singh commented, ‘You both are very cute.’

This post shared by Rubina Dilaik is being liked by her fans. His videos have received more than 2 lakh likes so far. Talking about the work of Rubina Dilaik, she is seen in the role of Soumya in the serial ‘Shakti-Astitva Ke Ehsaas Ki’ coming out on Colors TV these days. This character of his is very well liked. Also, his new song ‘Wrong’ has been released, which has created a boom on the Internet.