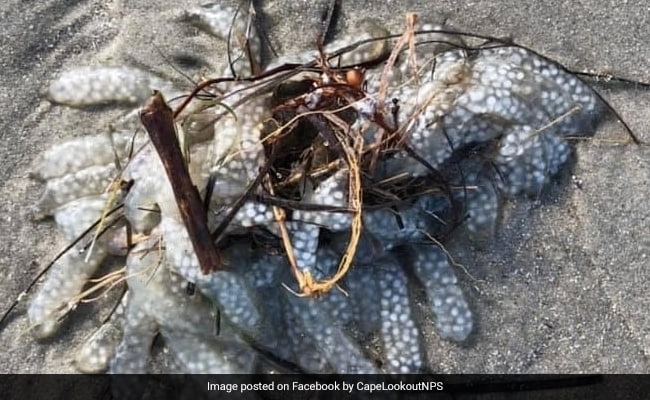 A ‘mysterious creature’ found by the sea, people were surprised to see

These days a strange creature (mysterious blob) is making headlines all over the world. An unknown sea creature has been found on the seashore in North Carolina, America, which everyone is surprised to see. Not only this, after seeing this, even experts are left disappointed. Nobody has any information about this ‘mysterious creature’

US National Park officials have shared the photo of this mysterious creature on their Facebook page and have asked people for information about it. Sharing the picture of this creature, he wrote that he has failed to recognize it, so now people are being asked for help to know about it. At the same time, the authorities have guessed that this organism may have come out of an egg.

This strange creature has many fingers and many limbs. This sea creature is seen filled with small white colored balls. This mysterious sea creature has been asked on Facebook, do you know what it is? It was found on the beach a few months ago. At the moment, no one knows anything about it. On the other hand, once the photo was shared on the social media platform, people started making different kinds of speculations about this creature.

However one person said that it is “Squid egg mass”. It should be put back into the sea so that this egg can grow and the organism can come out of it. Another person Michael Vecchione shared an article in the comment box stating that it is a squid egg mass, which belongs to the species of the marine organism Loliginidae.

Somvati Amavasya 2020: Date, Time and Significance of Hariyali Amavasya in...

India after surpassing Brazil becomes the country with the second highest-COVID...